Clinical Trials and their Evolution

Over the past decade, there has been a lot of change in the way clinical trials have evolved. Data suggests that the focus has not only shifted in terms of therapeutic areas but also in terms of other factors that we will see as we proceed ahead.

Before a well-designed system for clinical testing was developed, clinical trials were all trial and error, and individuals often got medicines that hurt more than heal. Our aim here is to show recent changes that happened over the past decade to shed light on the areas that are coming up and have become a major aspect of the study.

Below are some important trends and insights that were observed from the US government’s Clinical Trials Open Dataset.

Note: The following points cover trends and insights of the clinical trials data from the years 2010-2020 and 2017-2020. This includes the studies that are completed, currently active and recruiting, or are about to start.

(The colour scheme has been set to maintain homogeneity for particular insight).

1. Total Number of Trials Carried Out 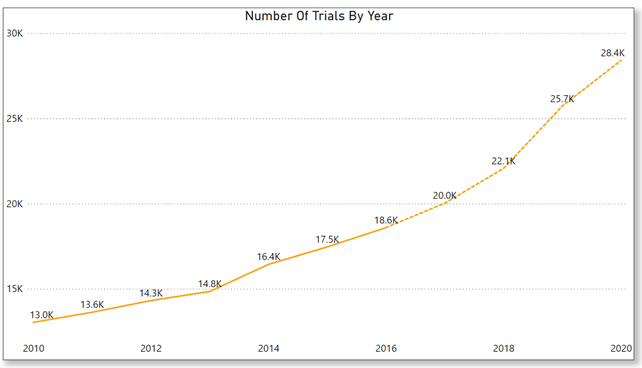 The above line chart and card represent the total number of trials active in the past decade.

· Recent trends (Fig: 1) (2017 – 2020) show the number has grown to 2k to 2.5k per year. This indicates significant progress made in this space with a steady increase over a major part of the decade followed by a rapid one in the latest part.

2. Number of trials carried out in a particular therapeutic area

The above bar graph (Fig: 2a) shows how the number of trials in a particular therapeutic area increased. Also, there are a few areas that came into the limelight and became prime areas of research in the past decade. 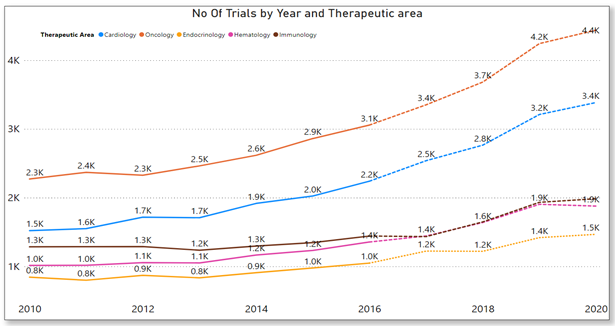 The line chart (Fig: 2b) above shows the top 5 Therapeutic Areas (TAs) in which most trials were carried out.

· Areas like Hematology, Cardiology saw a sharp increase in the number of trials from the year 2015 till 2018 while Oncology being the leader among all.

· Endocrinology, on the other hand, has grown slowly in the last 3 years while Oncology and Cardiology have shown a significant increase in the number of trials indicating a shift of focus in these areas in recent years. 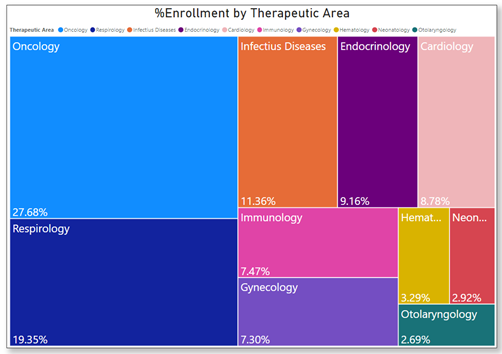 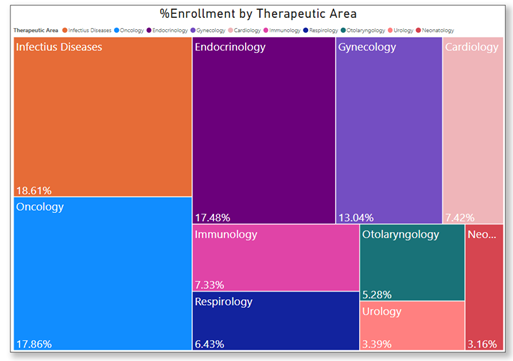 The above visual shows(Fig:3a and Fig:3b) the % enrollments for the trials conducted in the top 10 therapeutic areas.

· Oncology tops both in the number of trials and also has the highest share of enrollment with 27.05% in the last decade.

·The last 3 years (Fig: 3b) show infectious diseases(18.61%) moving past Oncology indicating a shift in the focus of trials being conducted towards the new diseases.

· Areas like Cardiology, Oncology have been saturated and most of the research has been done in this space in past decades.

4. Number of Trials by Therapeutic Area and Status 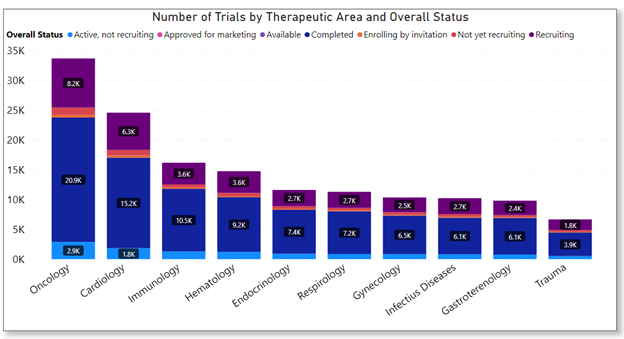 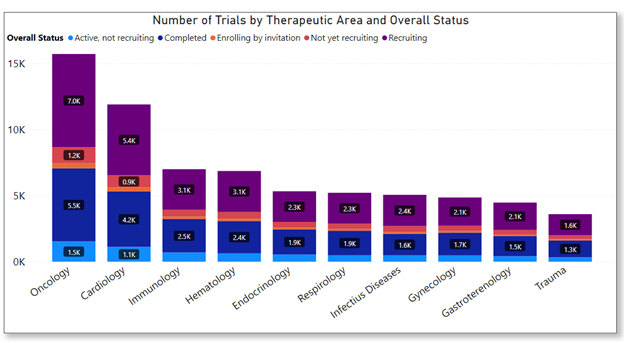 The above stack charts(Fig:4a and Fig:4b) demonstrates the overall status of trials by Therapeutic Areas.

· A maximum number of trials between 2010-2020 for each therapeutic area were under the “completed” status.

· In the recent 3 years (2017-2020) (Fig:4b), a major number of trials have come under the status “recruiting”. This indicates new trials and research is being actively conducted or planned to be conducted in the coming years hence explaining the rapid increase in enrollment in these areas.

· Areas like Infectious diseases have seen an increase in the number of trials (evident with increased enrollments) compared to Gynecology over the last 3 years.

5. Top Countries in terms of Number of Trials Carried Out 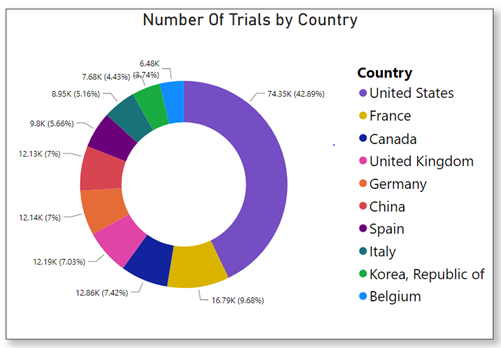 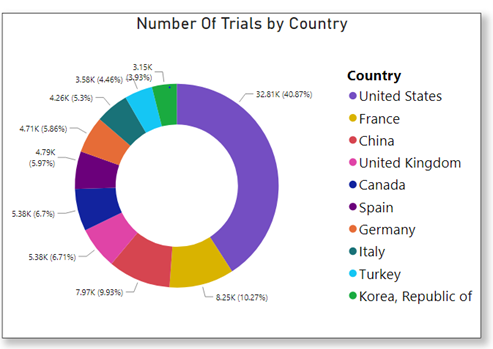 The above doughnut chart demonstrates the number of trials being conducted in different countries over the period.

· The USA has the highest percentage share of all (43.31%) since the trials are all driven by them.

. In the last 3 years (2017-2020)(Fig: 5b) countries like Turkey have emerged on the toppers list in the number of trials. Also, others like China and France have shown a significant increase in the share of trials being conducted.

· The distribution of trials conducted across the world in recent times indicates signs of investments made in other superpowers of the world such as China, France, etc, and USA not being the lone flag bearer in clinical trials space.

Oncology seems to be the most researched area which also goes with the fact that cancer has been the recent focus of study for the majority of the researchers. We also see a linear growth in the number of trials being conducted every year. This is also aided by technological advancements in this space. An increasing number of researchers, agencies have come up and actively worked in this area over the past decade. Enrollments in Infectious Diseases over the last three years have grown rapidly which shows that more and more new diseases have been researched. On the other hand, areas like Cardiology, Respirology which dominated the past decade seem to have hit a saturation point.

Also, looking at the current COVID situation and the amount of research being conducted in this area, can one assume that Covid might sooner or later make it to the Top-10 of the most number of trials conducted?

Competitiveness of On Target Earnings: The Core of Sales Compensation

A business-ready Incentive Compensation solution that supports implementations and changes in half the time at a third of the cost.

Automate your incentives in 6 weeks.