How to design your incentive payout curve?

Now that we understand fundamentals of payout curve, let’s move our focus to their actual application in real world. A traditional incentive payout curve delivers different payout amounts for performance between minimum (threshold) level of performance and excellence (“superior” or “stretch”) level of performance. Usually, a curve is designed to pay out 100% of an employee’s incentive opportunity on achieving the target. Additional elements such as threshold, target slope, excellence slopes, caps need to be modeled to positively reinforce and motivate sales personnel to work towards broader business goals.

Deciding the threshold and excellence for payouts

A company in general, has a fixed commission budget. Scenarios may occur where the company is paying underperformers at the expense of paying your top performers or overpaying top performers by compromising on payments of their core salespeople. Both such scenarios can be avoided by carefully designing your threshold and excellence points.

Apart from deciding the targets for annual goals, a company must also consider other factors that include external parameters associated with macroeconomic factors, competitive opportunities and threats, technological disruptions, and regulatory changes. The more volatile the economic and business background, the more likely a payout curve is set to a wider range for threshold and maximum percentages. The below mentioned guidelines can provide a good starting point.

Threshold for payouts should be:
– At the lower end of a company’s peer-performance range (10th percentile)
– Above the previous year’s results if the markets are growing
– High enough to create some modest value for the company
At a point on the curve where sales personnel have a 90 percent chance of achieving the minimum payout 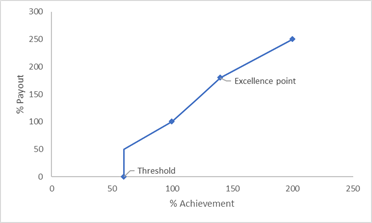 Excellence for payouts should be:
– At the top end of peer performance (90th percentile)
– In line with previous performance and record-level company performance as is appropriate
– At a level that will create significant value for the company as compared to peer and historical performance
– At a point where sales personnel have about 10 percent chance of hitting the maximum

Should there be a payout cap?

The decision as to whether to cap an incentive plan is driven by the firm’s ability to predict market demand accurately, as well as the firm’s financial goals, culture, and philosophy. Caps have some considerable disadvantages. They can dampen the motivation of top performers as one of the key points of a sales hiring is that the company tells you they have uncapped payout curves. They can delay the incremental sales by top performers so that they can get appropriate credit for it in the next payout period. 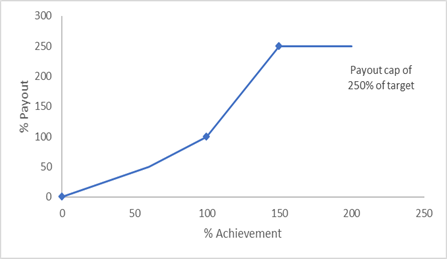 Some companies may want to put soft cap instead, where any payout exceeding a certain high performance in one payout period is placed on hold and is only payable if the salesperson makes their goal at the end of the plan period. Soft caps tend to be more accepted as the possibility of making high incentives is still there but on some conditional basis (e.g. continuity of performance through the plan period).

Despite the danger of damaging the motivation of hard workers, incentive caps have an advantage in unstable markets, where it is difficult for management to predict future demand accurately. Using an incentive cap prevents unearned windfall sales if goals are set for a sales level that turns out to be easily attainable. Caps can also be used to promote controlled selling and ensure higher customer service for complex products which require a long implementation cycle.

The value of upside and downside acceleration

Most companies have accelerators and decelerators built in their payout curves. Such payout curves give higher payouts to sales personnel overachieving their targets and penalize the low performers who do not achieve a certain sales level by further lower their payouts as compared to their achievement as per a set quota.

The trigger of the accelerator could be at the last year sales or slightly above that to account for carryover sales from the prior year. This motivates the sales personnel to push through their quota and gives increased incentives (sometimes up to 3x) for each additional percentage of sales achieved over target. Accelerators can also be built up in a step curve where the commission rate is changed for all the sales accrued above the inflection point. 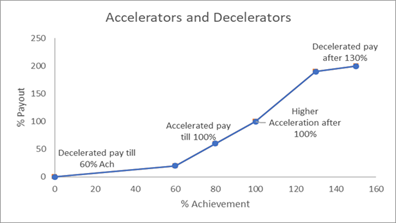 Decelerators can also be used in places of payout caps where the earnings for a sales personnel ceases to increase significantly, helping the company plan for their inventory better without making the sales personnel feel that their earnings are being capped.

Payout curves define the willingness and ability of a firm to pay its sales personnel which aligns both with the corporate objective and the philosophy of paying for performance. Paying commissions from the first sales dollar results in the low performing sales personnel having at least some incentive incomes, making them complacent, and draining the corporate budget. On the flipside, not paying enough to your top sales personnel can result in them looking for greener pastures and will end up hurting the company’s revenues. 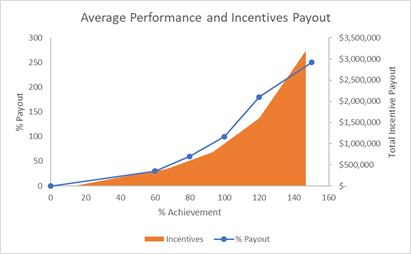 The best practices in designing the pay curves is to have a rigorous mathematical modelling exercise to find the balance between paying for performance and keeping the total cost of incentive close to the budget. A company should always strive to keep its top performers to keep bringing in top revenue, while motivating the low performers to contribute to at least some sales growth. Having a well thought-out payout curve takes care of the low performers, the large middle percentiles, and the truly high performers.

Designing and implementing a payout curve that caters to both the need of the company and the aspirations of the sales personnel is a difficult, but not an impossible task. Payout curves are not the complete solution to the myriad challenges of sales compensation but add much value to the sales strategy and salespeople motivation and overall engagement along with retention of top performers when implemented to accurately pay for desired sales performance.

Competitiveness of On Target Earnings: The Core of Sales Compensation

A business-ready Incentive Compensation solution that supports implementations and changes in half the time at a third of the cost.

Automate your incentives in 6 weeks.